Investors can raise the game in many different ways and that’s certainly the case with Nick Roberts and MyPass®. Nick has been a supporter of MyPass® since 2018, and in that time has provided strategic guidance, resources, network connections and much more as a Director and Board Member.

We interviewed Nick to learn about his experiences in early-stage businesses across the technology, compliance and investment sectors. 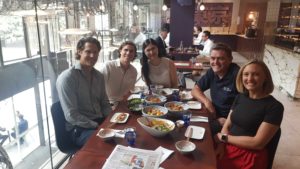 When did you first come across MyPass® Global?

I met Matt Smith in 2015 through another MyPass® Investor whilst I was still at a previous business called RISQ Group. When I met Matt I was very impressed by him and the idea of MyPass®, but to my regret, I thought it was too early for me to get involved at the time! Some key things I focus on when considering potential investments are a great founder with vision and determination, a large potential market, and the team’s ability to execute and deliver on their plans. Many people have great ideas but few know how to execute them. One of the most consistent and impressive things about MyPass® from the first day I met Matt is the fact that the milestones, the forecasts and the objectives have all been ticked off, normally ahead of time. By building that record of consistent achievement and execution, it started to become quite obvious to me that MyPass® was going to be a really successful business and a great investment opportunity.

How did you get involved in the technology space?

My first experience as a Founder was in the B2C space. After being part of a team that bought into and then sold a rugby magazine in the UK, the same team started building sports information sites, such as the original Planet Rugby. It was an exciting time to be involved in the early stages of the internet when the business and valuation focus was all about acquiring users or 'eyeballs' and less about revenue. After selling that business to a UK listed company in 2000, I moved on to co-found a business called Complinet which was a compliance software and data business. This provided me with the opportunity to launch in the US in 2004 and then move to Australia in 2008 to build the Asia operations. Complinet was bought by Thomson Reuters in 2010 as they wanted to move into the Governance, Risk and Compliance (GRC) space. It was at my next venture (RISQ Group) that I then met Matt Smith. At RISQ we specialised in providing background checks for potential employees before they got hired – everything from credentials and university qualifications to police checks. We could see the time and money that was being wasted by performing the same screen every time people moved jobs, with no reuse of the data that had been previously captured. This is why the whole 'passport' concept Matt and the team at MyPass® were building was something that I had some familiarity with and could see the need for. After the sale of RISQ, I was lucky to be able to start spending more time supporting early-stage-growth businesses and their founders which is what led to the formation of Scalare Partners, the early-stage investment and support business I am now also involved in.

What were the key themes that you saw in each of those successful businesses?

People. A common theme for me on my journey and which I am sure is true of many is the importance of pulling together the right team around you. Sometimes for founders of small businesses, big hiring decisions can be quite hard and scary to take the plunge on, but once you make them they can take the business to the next level. I love the work we’re doing at MyPass® building the team and culture because it’s attracting this talent that will help make the business very successful.

Of course, there also needs to be a market for what you’re selling and you need to be able to execute on that opportunity but ultimately you need to have great people to do that. That’s one of the things that Matt and the team have done really well at MyPass®.

What is the potential you see in MyPass®?

Whilst it’s a relatively simple concept behind MyPass® it’s also hard to deliver and I think the MyPass® approach of getting deep into specific industry verticals is the right one. Once you get that critical mass in the industry there’s really no limit to the growth potential both domestically and internationally. By moving from Resources to Healthcare, the business is also demonstrating that we can solve some very similar problems in different verticals. That’s a great growth opportunity and for the business to keep growing quickly through COVID while pivoting and supporting healthcare and volunteering institutions during the pandemic says a lot about Matt and his overriding desire for MyPass® to be a tool that helps people stay safe. The business has real momentum and I think in twelve months time the business is going to be in a very different place, which is exciting.

Ultimately, I think whether you’re joining MyPass® as a new staff member or joining as a new investor, it becomes quite obvious, quite quickly that there is something special about the culture and something special about the opportunity, which is very exciting.  I’m excited to be involved as an investor and as a Director. Of course, there are always challenges to solve but Matt and the team are solving them and creating more and more opportunities. It’s a great place to be and a great opportunity.

In late 2019 you started your own investment business, what inspired you to do that?

Scalare Partners was formed because we could see a growing gap where talented, early-stage founders in Australia were struggling to get the funding and probably more importantly the hands-on support they needed to develop their ideas and businesses.

We talked before about the importance of getting the right team together and at Scalare we are very lucky to have a small team that has a lot of experience of building and growing technology businesses from early stages to exit and who are really passionate about helping as many others as we can be successful in building a business. We also believe in having some fun in between all the hard work!

Community is key to what we are building at Scalare from pulling together networks that we’ve all built throughout the world, to connecting our founders to share ideas and advisors to come in and help when needed.

One of the key issues we are looking to solve is that founders are struggling to get the right resources to grow. Often you can’t go out and hire full-time key people when you’re early-stage. MyPass® is a great example of that with Jenny Li, MyPass’ Finance & Commercial Lead, who came through Scalare.

I’m really excited about the future of both Scalare & MyPass®.

...for the business to keep growing quickly through COVID while pivoting and supporting healthcare and volunteering institutions during the pandemic says a lot about Matt and his overriding desire for MyPass® to be a tool that helps people stay safe.