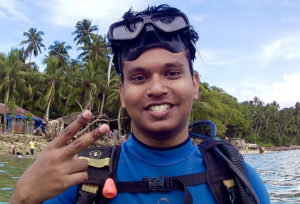 Our next MyStory captures the Journey of MyPass®’s new UX designer, Nishanth. A humble, intelligent and passionate individual, he has a hunger for learning and has brought that enthusiasm with him to our Perth-based team.

Our conversation starts with an explanation of this picture of him, scuba diving off the coast of India.

Is diving something you’ve done a lot of?

So far I’ve been able to save up and go out on a couple of diving trips. The first was a beginners course where I learnt the basics. Then the second time I went to a place called the Andaman Islands which is actually closer to Indonesia than India. It was a good experience and was the first time I’d seen real coral and deep-sea fishes.

Are you generally an adventurous person?

Not really, but I enjoy nature a lot. I grew up in the mountainside and that gave me a real attachment to nature. When I was young I wouldn’t stay at home; I’d go to the river and go out and explore. Over the years growing up I’d go on small trips to explore places. I prefer to find my own destinations to visit rather than follow the crowds or popular places.

Where about in India did you grow up?

It was in South India. It’s a small town called Pollachi which is about 50km away from the Coimbatore city area, towards the Western Ghats, the western mountains of Southern India. I’ve lived across multiple places in India, originally at home with my parents until I was sixteen, then I went to a boarding high school. I then did my undergrad in a different city about 8-9 hours from my hometown before moving to a bigger city for my first job. Compared to where I grew up, I got to see the cities I moved to were larger and that’s where I first understood that everything happens in the city - that’s where more opportunities are.

My journey to becoming a UX/UI Designer was pretty strange because when I was young I was really interested in the Sciences, especially Physics. I am still really interested in learning about space and Space Science and I keep in touch with what’s happening in the Space Science community. I was so curious about how people use telescopes and technology to understand the universe. Then I had my first computer when I was around 11 years old which changed everything. I was so fascinated by how this small machine does everything. I started learning more about how it works and through that process, I fell in love with technology, planting the seed in me wanting to do something with it later in life. I wasn’t very good with numbers. I used to hate math, so unfortunately, I wasn’t able to join a Computer Science course.

Instead, I looked for another way to make a career in technology which is where I discovered I could use Communications to bring people closer to technology. In my undergrad, I got to learn a broad range of ways to communicate with people such as film making, professional writing, digital and visual arts, and fine arts. Believe it or not, my undergrad thesis was actually a study on the movies of Christopher Nolan. I watch a lot of movies. While growing up that was how I learnt about the world. It is how I learned that the world isn’t all the same as what I see around me; how cultures are different around the world and how it makes people different.

All of this made me think more about if I were to do something that everyone can use; what do I need to know or how do I learn to do that? I learnt about human cognition and how it plays a major role while designing a tech product. That led me towards Human Centred Design, which user experience (UX) is a part of.

After graduating I started my first internship at Zolo, where I learned what is work life. I experienced how hard work pays off every single time. It was a small start-up with a small seed funding - we worked long hours in a small team. People started using the product more and we were reaping the rewards afterwards. That led to some strong funding rounds. Seeing that growth because of the efforts we put in showed me that it doesn’t matter if you know everything or not. But on an everyday basis, if you keep working and improving yourself to achieve a higher goal, you can enjoy its rewards later. After a while, I understood it was time for me to learn further which led me to move over to Western Australia and start my Master's degree at Curtin University.

Everyone told me it was going to be such a big experience moving to a new country but for me, it wasn’t that overwhelming. Yes, the roads were cleaner and buildings were a bit taller but people were still people. They were culturally different but apart from that, they’re still human beings by nature. It took me a while to understand this and afterwards I was able to start conversations with anyone.

What was your first impression of MyPass®?

After I first received a message from one of the team, I actually thought it was spam because I received a lot of messages like that. However, I soon realised this was a real company with real people who were interested in me! That’s when I figured out it was a good opportunity for me to try and get involved.

My first impression of MyPass® was that they were doing something very important. In the first semester of my Master's degree, I did a case study on the number of workplace accidents that happen in Australia. The number of incidents is really high and the companies are regularly paying out huge amounts of compensation to employees when safety measures are breached. I thought if these companies had the proper tools to manage their compliance, they will know who is trained with the appropriate safety precautions and won’t accidentally place the wrong people in the wrong roles. This helped me see the greater good of Mypass® and what it could become in the future.

What are your aspirations for the UI/UX of the product?

I feel that if I have the opportunity to stay here for a long time I can help take the product towards the goals we’ve set as a team. Whether that’s MyPass® being used by companies in every industry that requires compliance management, or we can take our model and architecture to do something different in the future. For example, the recruitment feature within the product could become a bigger tool, or it could become a whole workforce management system with various products similar to SAP.

The fact that MyPass® has achieved what it has with minimal funding up until this point is very impressive. Some startups really tailor their development towards what will impress investors to try and get that funding. However, I believe the companies that keep the users at the centre of their development direction will build better products because once you get that right, it will attract investors down the line and lead to expansion.

A great user experience will improve productivity in clients. Putting users in the centre of the product will build their trust in MyPass®. This will make us a strong brand and people will seek MyPass® products when they know what we do and stand for. I want to help MyPass® to build great user-centred products. I am happy to lend my hand at every facet of the product – even branding and marketing.

A lot of people join a small startup to learn things and then look to move onto a bigger company after that. For me, I think if you have a small product to work with where you can make a bigger impact, you can leave a legacy. When I see small positions I take it in that way, whether it’s work or university. I feel I should give my 100% and try to leave that mark. With MyPass®, I’m starting a bit slow as I am balancing university and work, but I’m looking forward to having that everlasting impact.

My first impression of MyPass® was that they were doing something very important.